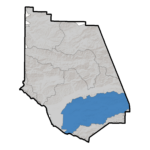 The northern boundary is formed by the Santa Susana Mountains, South Mountain, and Oak Ridge Mountains. The southern boundary is distinguished by the Simi Hills and Santa Monica Mountains. Presently 50 percent of the Watershed is undeveloped open space, 25 percent is agricultural, and the remaining 25 percent is in urban land use. The Watershed ultimately drains to the Pacific Ocean through Mugu Lagoon. 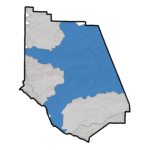 The Santa Clara River Watershed Committee (SCRWC) was formed in July 2006 as a coalition of stakeholders addressing water resources issues critical to the watershed. The SCRWC is engaged in a variety of local planning efforts including development and implementation of an integrated regional water management plan (IRWMP), implementation of integrated projects identified in the IRWMP and development of future project ideas to address the objectives developed by the Committee. Meetings are typically held on the fourth Thursday of every other month at 9:00 am. 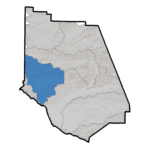 The Ventura River watershed, the smallest of Ventura County’s three major watersheds, covers an area of about 227 square miles (144,970 acres). All of this land drains into the Ventura River, either directly or through creeks and tributaries, each of which has its own smaller drainage area called a subwatershed. Major tributaries include Matilija Creek, North Fork Matilija Creek, San Antonio Creek, and Canada Larga. The Ventura River watershed, like the county’s other major watersheds—Santa Clara River and Calleguas Creek—ultimately drains to the Pacific Ocean.

The Ventura River watershed is a remarkable watershed for several reasons. Unlike most watersheds in southern California, no imported water is used; residents rely 100 percent on local water supplies. Lake Casitas, fed by diverted Ventura River water and Coyote Creek, is the primary source of water for users the watershed. The city of Ventura also diverts surface and subsurface water from the Ventura River in the Foster Park area. Groundwater, provided by individual wells or small water companies, is another important water source in the watershed, especially for farmers. Aquifers in the watershed tend to drain relatively quickly, but also recharge quickly with sufficient rain. Many farmers and small water districts rely on groundwater until supplies run dry and then use Lake Casitas water as their backup.

The land in the watershed is largely undeveloped. The northern half of the watershed lies within the Los Padres National Forest, with much of the Matilija Creek subwatershed (the actual beginnings of Ventura River) protected in a legislatively-designated wilderness area; and most of the southern half of the watershed lies within unincorporated Ventura County, which has policies that favor agricultural and open space land uses.  Urban areas in the watershed include the city of Ojai; the communities of Meiners Oaks, Mira Monte, Oak View, Live Oak Acres, Casitas Springs, and Matilija Canyon; part of Upper Ojai; and part (mostly Ventura Avenue) of the city of Ventura.

The Ventura River Watershed Council was formed in May of 2006 as a coalition of stakeholders addressing critical issue in the watershed. This Council serves as the stakeholder group for a variety of local watershed planning efforts, including the development of the Integrated Regional Water Management Plan, and more recently the Council is focused on the development a watershed management plan under the direction of the Watershed Coordinator. For more information about the Ventura River Watershed, the Council, and development of the watershed management plan, please visit the Council’s website at: http://venturawatershed.org/ and view their map atlas at: http://venturawatershed.org/map-atlas